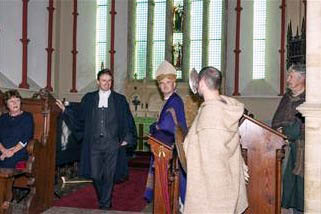 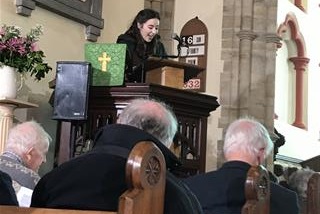 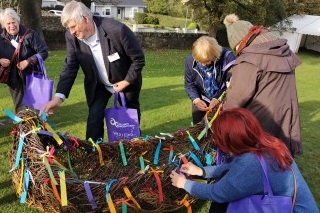 To mark the 850th anniversary of the arrival of the Normans, this year’s Ferns Conference took an innovative approach.  The MacMurrough Inquiry looked at the extent to which one man was responsible – that man was Diarmait MacMurrough, King of Leinster and his royal seat was in Ferns.

Using a model of a judicial inquiry and informed by Brehon Law, , barristers, historians and academics collaborated with local people in Ferns on this exciting project which explored the fascinating tale of power and intrigue in medieval Ireland.

The Inquiry took place in St. Edan’s Cathedral, Ferns on Saturday, October 12th, registration at 9.30am and concluding at 5.30pm.

On Sunday, October 13th  the conference field trip visited the nearby remains of the O’Doran Brehon Law School.

For more information and to book a place please email: fernsheritageconference@gmail.com 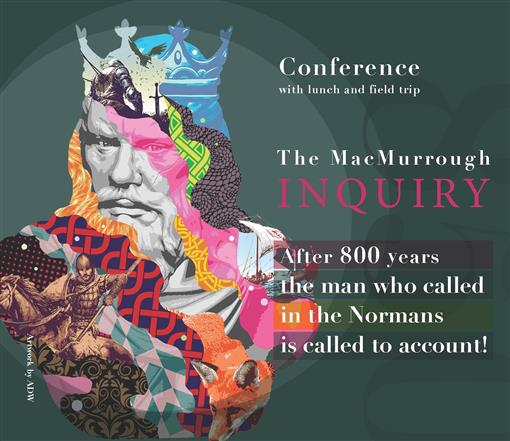 A tale of power and intrigue in medieval Ireland…

The stories of power shifts and inter-dynastic battles which led to the Normans arriving in Ireland are legendary. Alliances were constantly made and undone by Gaelic kings in a continuing struggle to retain power.

Many view the arrival of the Normans in 1169 as an invasion, a betrayal by the ambitious King of Leinster, Diarmait MacMurrough, whose royal seat was in Ferns, the Ancient Capital of Leinster.

Modelled on formal judicial inquiry conducted into a matter of real public concern, ‘The MacMurrough Inquiry’ will shine a light on key events which led to the ‘invasion’, looking at the extent to which Diarmait MacMurrough was responsible. Informed by Brehon Law, leading barristers, historians and academics are collaborating with local people in Ferns on this exciting project which will explore the fascinating tale of power and intrigue in medieval Ireland.

The Inquiry will be held in St. Edan’s Cathedral on Saturday, October 12th followed by a field trip to the O’Doran Law School in Ballyorley on Sunday, October 13th. The MacMurrough Inquiry is the fourth in the series of annual Ferns conferences.

The Conference is organised by local community group the Ferns Heritage Project and supported by Wexford County Council.

Thanks to Alan Owens for his trojan work on video presentations.