Ferns first came to prominence when the resident King of Leinster, ‘Diarmuid MacMurrough’ brought the first Normans to Ireland in 1169 to help him fight his battles (they never left). However his successors eventually surrendered the Castle when Chieftain Donagh McMurrough did so in 1449.

The present Castle site can be dated on architectural grounds to c1220 indicating that it was built during the period of the Norman Marshall family control of Ferns. The Castle remained the ‘caput of the major’ until 1360 when it was lost back to local Chieftains, the Kavanaghs, who in turn held it until about 1540 after which it was staffed by a succession of English Governors. Over its lifetime the Castle was sacked, damaged and modified several times.

The Chapel’s magnificent vaulted ceiling is borne by moulded ribs resting on corbels in the form of capitals. Three windows light the interior of this 13th century architectural gem which is regarded as the finest of its kind in Ireland.

It is possible to climb safely to the top of the 3 storey southeast tower and enjoy the spectacular view of the surrounding lush countryside. The strategic importance of this Castle can only be fully appreciated by viewing the area which it commanded

The Visitors’ Centre is open from end of May to end of September from 10a.m. to 6p.m., seven days a week. Guided tours of the adjacent Castle are given daily by enthusiastic OPW staff.

The Tapestry project, located in the Castle Visitors’ Centre, is an exciting community led initiative showcasing the history of Ferns in the ancient art of crewel embroidery, from the arrival of St. Aidan in 598AD to the coming of the Normans in 1169. The Tapestry, comprising 25 panels, measures 50ft x 2ft approx was officially launched by President Mary McAleese in July 2004. The Tapestry group give talks and exhibitions on their work.

If you’re interested in tapestries, a visit to nearby Ros Tapestry in New Ross is highly recommended. www.rostapestry.com 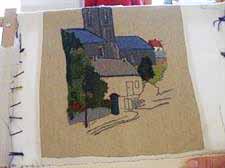 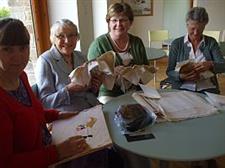 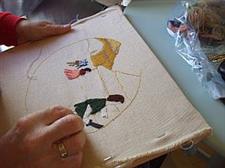