An Evening at Ferns Castle

The people, the ancient buildings and the history of the area were the unique assets which made Ferns a most attractive tourism experience. This was the view of the two main speakers who addressed the ‘Evening at Ferns Castle’, organised by Ferns Development Association on Friday, May 25th.

Aidan Pender, Director, Strategic Development, Failte Ireland and historian Brian Donovan both referred to the family names of people of the Ferns area which demonstrated a wide range of origins in different European countries.

Aidan Pender whose family originated in Ballinakill, Ferns said that the village had an abundance of vital tourism assets which were of great interest to tourists from countries like the USA, France, Germany and the UK. He commended the Ferns Development Association on its website www.fernsvillage.ie which he said was a most effective way of communicating the Ferns message across the world.

Historian Brian Donovan whose family retains ownership of Ferns Castle but has a long term agreement with the OPW to have it open to the public, detailed the origins of the acquisition of the Castle by his family. The family originated in West Cork and became involved in the brewing business in Dublin and subsequently in farming at Ballymore, Ferns where the well known Ballymore House Museum is based.

The names of the residents of the Ferns area listed in the 19th Century Griffiths valuation, the original rating base, indicated the breadth and depth of the origins of the population. These ranged from the old Irish to Vikings, Normans, German palatines and English, he said.

Ferns was unique because, unlike many other centres of power and religious foundation the associated buildings which had been destroyed elsewhere, remained in Ferns and were available to add to the tourism attractions of County Wexford. These included the Castle, the Cathedral and the surrounding ecclesiastical monuments which were of great interest to visitors from home and abroad. He said that Ferns had an important role to play in the linked tourism trails which were being developed throughout County Wexford.

However, the evening wasn’t all about talking history and heritage, entertainment was provided by the Quaid Quartet from Clonegal and local young harpist Conor Morris. Bui Bolg, the Wexford based street entertainment theatre group provided the hilarious ‘fiddling foxes’, children played medieval games of draughts, rings and archery was provided by Castle Archery who are based in Wells House, Kilmuckridge. Wine and canapés were served in a medieval surrounding in wonderful summer sunshine. 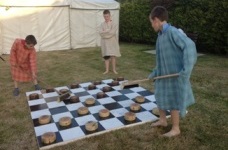