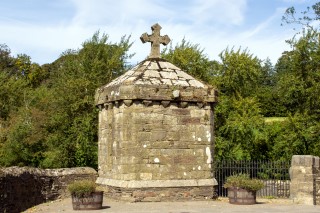 St. Aidan, first Christian Bishop of the Diocese of Ferns, was born in Co. Cavan in the year 560 A.D. Mogue, still a popular name in the area, is a derivative of the old Irish name ‘Maogh-Óg’, meaning the young Aodh. In time this became Aodhaghan and later Aidan. On his return from Wales, having studied under St. David, he established his first monastic settlement on land granted to him by King Bran Dubh in Ferns. Legend has it that whilst building his monastery his followers complained that no water could be found, whereupon he ordered them to dig in a certain area, and a well of crystal clear water was found name Tiobhraid Maogh-Óg or St. Mogue’s Well. The entrance to the well, now underneath the road, was built in 1847. Note the carved heads on this structure taken from the nearby Medieval church at Clone. The waters from the well are said to have curative powers.