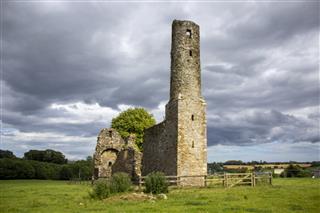 In c1160, Diarmait MacMurrough founded an Abbey in Ferns ‘for the health of my soul and my ancestors and successors’. Its foundation charter included an entitlement to a ‘portion of all beer brewed in Ferns’. Through the winter of 1167/8 MacMurrough took sanctuary in the Abbey whilst he awaited the arrival of his Anglo Norman allies. The Abbey was suppressed in 1539 and the property and 630 acres of land reverted to the King of England. It is located within the original monastic enclosure of St. Aidan. Parts of the barrel vaulting of the chancel, showing some plain ribs, are still intact. Behind the chancel are the sacristy and sacristan’s room overhead. There is a narrow winding stair to the top of the belfry.

Survey work in the area surrounding the Abbey which was conducted in 2015 by The Discovery Programme showed up underground boundary walls which indicated a high status structure. The results of a further survey conducted in 2017 are awaited – this work is playing a major role in helping us understand and uncover the nature and extent of life in Ferns as a monastic settlement through to the medieval period.