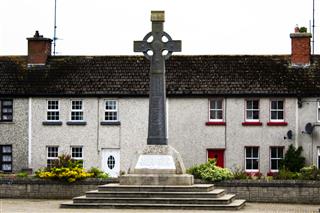 Born in Tincurry, Ferns in 1753, Fr. Murphy was the primary leader of the Rebels in the 1798 insurrection against British rule. It was in Ferns and its hinterland that the spark that was to become the conflagration of 1798 was lit. The terrorising of the local peasantry and the burning of nearby Boolavogue chapel by the Yeomanry formed the catalyst for the bloody rebellion that was to follow. Fr. Murphy, hitherto a pacifist, was so enraged by the treatment of his parishioners that he urged his people to “die like men defending themselves, rather than to fall with folder arms under the enemy’s sword”.

The ensuing battles between the Yeos and the Rebels at such places as The Harrow, Oulart and Vinegar Hill, are commemorated in song and story. Following major defeats for the Rebels, he was captured and executed and part of his dismembered body is believed to be buried in the old cemetery adjoining the Cathedral. Thousands on both sides died in this Rebellion which had many causes and outcomes.